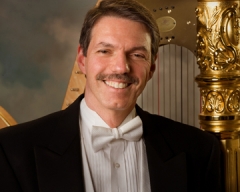 Dan Levitan is Principal Harpist of three professional orchestras: Marin Symphony (since 1984), Symphony Silicon Valley (since its founding) and Ballet San Jose Silicon Valley.  In addition to having performed with San Jose Symphony as Principal Harpist from 1978 until its closure in 2002, he has performed with the San Francisco Symphony, Opera, and Ballet orchestras, and is sought after as a soloist with orchestras, choirs, and other ensembles throughout Northern California.