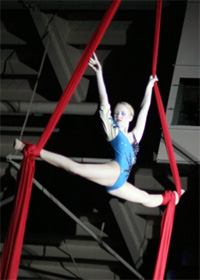 He has made appearances before numerous celebrities and world leaders, including the President of the United States, and has been featured in a Broadway premiere.  Greg Angelo performs aerial acts on vertical rope and tissue with the Velocity Circus Troupe, teaches aerial arts in San Francisco, and performs comedy character acting, as well as runs an off-the-beaten-path mini-museum in San Francisco.