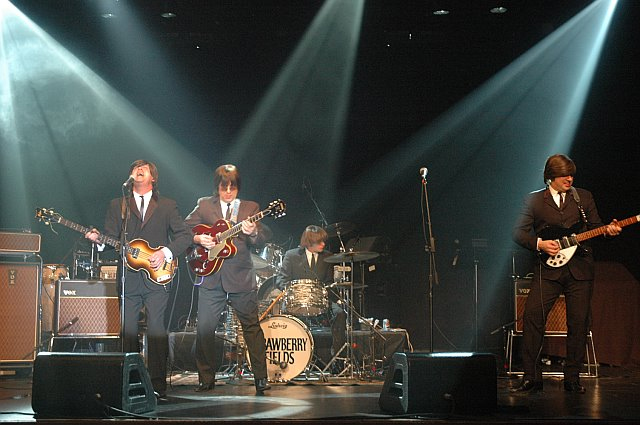 In 1964, the first US arrival of four lads from Liverpool changed the course of music history, as well as world history - forever! Their mere presence in a room made adolescent hearts throb and traffic jam for hours in every major city they toured. We are talking about none other than The Beatles, whose contribution to music defined an era. They affected every area of life including fashion, hairstyles, politics, protests, war, religion, and yes, peace and love.

Most of us never got to see the Beatles in-person because we either couldn't afford to buy tickets, or were just too young to stay out past 8 pm, but we were able to cling to an old album cover or photograph, hoping one day to catch a real glimpse of the Fab Four. Well, today, "Strawberry Fields" is here, a look-alike, sound-alike Beatles tribute, dedicated to bringing you, the audience, as close to a real Beatles concert as you can get. The band features true look-alike performers, handpicked from hundreds of auditionees, who speak in Liverpudlian accents and play on the vintage musical instruments that Beatles fans have come to recognize.

"Strawberry Fields" will take you on a Magical Mystery Tour through the 1960s beginning with the year 1964 - complete with mop top hair, black suits and thin ties - and through the first four albums of great songs. Our next stop is 1967, featuring the psychedelic era of the "Sergeant Pepper's Lonely Hearts Club Band" album - with all of the costumes and jackets featured on the album cover, and singing all of your groovy favorites. Our last musical visit is to a place where their hair got longer and their music more politically involved, featuring music from the "White Album," "Abbey Road," and "Let It Be."

"Strawberry Fields" has been performing to audiences of all ages for over a decade and in the past has shared the stage with featured guests from the Broadway cast of "Beatlemania;" Steve Holly, drummer for Paul McCartney who was featured on his second solo album, "Back To The Egg;" Billy J. Kramer (one of Brian Epstein's original British Invasion stars); Tony Sheridan, who recorded an entire album with The Beatles, themselves; and Pete Best, who (in case you've been living under a rock for all these years) was, early in their careers, the drummer of The Beatles! We have enjoyed many press reviews from several acclaimed journals and raves from fans everywhere. We've most recently performed an exclusive engagement for "EMI" at "Ruby Foo's" in NYC, not to mention our one-time-only recreation of The Beatles' historic 1965 concert at Shea Stadium - Shea Stadium! Wow!