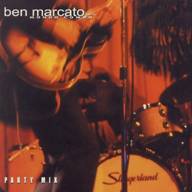 Ben Marcato was born and raised in Cincinnati Ohio. Before relocating to the Bay Area in 1993 to embark on his recording and performing career, Ben earned a Bachelor’s Degree in Jazz Guitar from The College Conservatory of Music at the University of Cincinnati. Describing himself as a “natural” singer, the self-taught vocalist draws inspiration from personal favorites like Louis Armstrong, Nat “King” Cole, Ray Charles, James Brown as well as Sinatra and Chet Baker.

Ben’s touring and recording band, known as “Ben Marcato and his Mondo Combo” have performed at virtually every noteworthy live venue in the Bay Area, including The Fillmore, The Plush Room, Slim’s, Bimbo’s, Rancho Nicasio, The Top of the Mark, Red Devil Lounge, Café du Nord and Bruno’s to name a few. The late, great leader of The Grateful Dead, Jerry Garcia, hand-picked “Ben Marcato and his Mondo Combo” exclusively, to perform at his 1994 Valentine’s Day wedding reception at the Corinthian Yacht Club in Tiburon.

Ben Marcato recently completed his fifth CD “Imagination”, a collection of jazz standards emphasizing his smooth, evocative interpretations of timeless tunes such as “Someone to Watch Over Me”, “Embraceable You” and “The Way You Look  Tonight”.  New York’s jazz maestro Cedar Walton played piano and wrote the impeccable musical arrangements for big band and string orchestra that complement the set of classic American songs. The recording is being marketed to jazz labels such as Blue Note, Impulse and Savoy.

New projects for Ben include an all-original album of songs written in the style of west coast cool Jazz and bossa nova, entitled “Naturally”. In addition, Ben and his six-piece band return to the studio to begin the work on a new CD of “old school funk and soul” originals featuring the title track “21st Century Fox”.